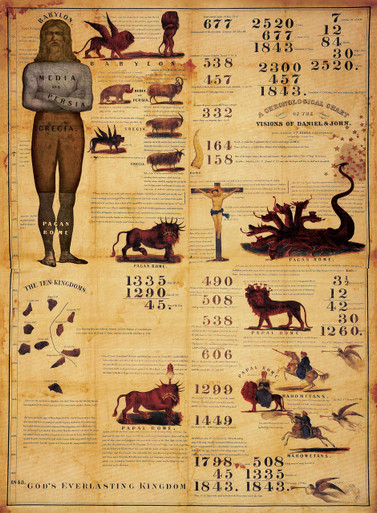 The 1843 chart was created by Charles Fitch and Apollos Hale in 1842 and was used during the Millerite movement to explain the prophecies of Daniel and Revelation. The chart is a wonderful resource for any study or seminar on the books of Daniel and Revelation, for the truths it promoted hundreds of years ago have stood the test of time. See https://www.ministrymagazine.org/archive/1942/05/historical-data-on-1843-chart

Ellen White wrote the following in The Great Controversy regarding the 1843 chart: “As early as 1842 the direction given in this prophecy to ‘write the vision, and make it plain upon tables, that he may run that readeth it,’ had suggested to Charles Fitch the preparation of a prophetic chart to illustrate the visions of Daniel and the Revelation. The publication of this chart was regarded as a fulfillment of the command given by Habakkuk. No one, however, then noticed that an apparent delay in the accomplishment of the vision—a tarrying time—is presented in the same prophecy. After the disappointment, this scripture appeared very significant: ‘The vision is yet for an appointed time, but at the end it shall speak, and not lie: though it tarry, wait for it; because it will surely come, it will not tarry…. The just shall live by his faith’” (p. 392).