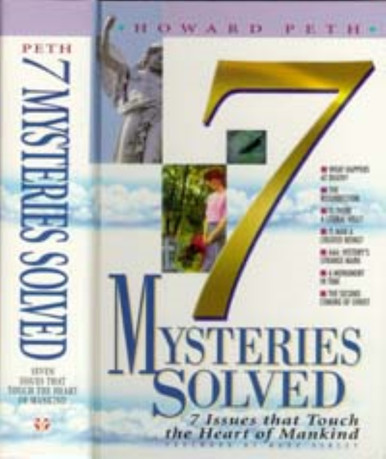 *Condition Note: Book is in good condition and clean inside, has signs of use on the pages edges. *

What happens at death?
The resurrection
Is there a literal hell?
Is man a created being?
666: history's strange mark
A monument in time
The second coming of Christ

Author and research Howard Peth turns to an ancient book—the Bible—for the answers and takes a closer look. For anyone who has pondered the mysteries of life and what the scriptures say on these key issued, Peth's well-researched book is surely worth the read. 7 Mysteries Solved does not assume the reader believes in God. It meets readers where they are and leads them to logical solutions for seven of the most puzzling mysteries ever to confront mankind.

God's Existence
Does God exist? How do we know there really is a Divine Being?
The Folly of Atheism
Does God Exist?

Deity of Christ
Was Jesus Christ divine? Was the humble Carpenter of Nazareth really the holy Son of God? What can we believe about His resurrection?
Jesus Meets Every Test
The Resurrection of Christ: Myth or Miracle?
Life's Greatest Question

Day of Worship
Why do most Christians worship on Sunday while many others observe the seventh day of the week? Which day is the Christian Sabbath?
When God Said "Remember" and the Whole World Forgot!
Sunday in the Bible

Final Events the Future
What does the future hold? Is there any way of knowing what's next on the world's agenda?
History Told in Advance
Signs of Christ's Return in Sun, Moon, Stars
Truth on Trial: The Secret Rapture
The Millennium: God's Timetable

Mark Of The Beast
How can we identify the Antichrist/Beast power?
What is meant by the mysterious "Mark of the Beast"? Is there any way we can avoid that Mark?
Antichrist Unmasked: Beast Power Revealed
The Mark of the Beast vs. the Seal of God