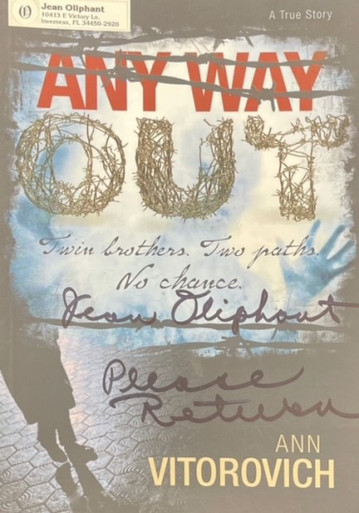 They had dreamed of this moment for years, and on that snowy day in January their dream finally began coming true. Identical twin brothers Voja and Cveja Vitorović would escape from Communist Yugoslavia—Voja defecting from a tour group in Rome, and Cveja taking his chances at the heavily guarded border. But would Cveja survive his encounters with the border and rejoin his brother? What would happen to Voja after an unnamed individual made the very serious accusation that he had betrayed not only his church but Italy as well? Would their faith be strong enough to weather the ordeal? This is a true story of relying on God through every difficulty and believing that His will would be accomplished no matter what happened. God had a plan for those twin boys of His, and He worked mightily behind the scenes to overcome all their obstacles.

CONTENTS The Gray Falcon and the Promise; Voja's Story--To the Eternal City; A Refugee in Rome; Cveja's Story--Left Behind; Encounter With the Border; Adventures on the Adriatic; License Plate H-8; Intrigue on the Coast; Escape in the Night; Dangers at the Border; The Singing Stranger; Surprises in Salzburg; Together--Reunited at Last; The Rescue; The Unpardonable Sin; A Mystery, a Challenge, and a Wedding; Accused; The Deadline Approaches; An Astounding Turn of Events; Date With Destiny; Voja Meets the "Unpardonable Sin" New Beginnings Epilogue