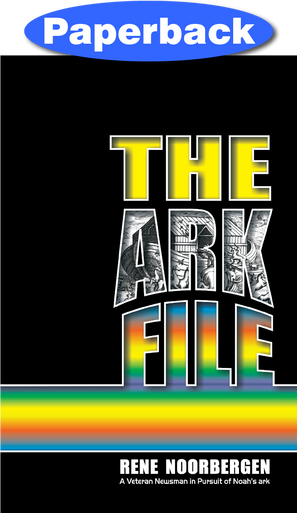 No other object mentioned in the annals of ancient history and mythology has so stirred the imagination of amateur archaeologists as the ship known to us as Noah's ark.
In The Ark File, the author has traced the almost unbelievable tale of research and frustration that has accompanied the modern search for it.
Is the story of Noah's ark and the Flood a mere myth, or is it possibly the agonizing account of a survivor of the greatest tragedy ever to befall mankind?
This book presents the answers connected with this age-old mystery.

Rene Noorbergen was born in Groningen, the Netherlands, and educated at La Sierra College in California, and at the University of Groningen.

His writing assignments have been divided between Europe and the U.S. He was chief correspondent for the U.S. Army's The Soldier Illustrated and West Coast correspondent for many European magazines, and he wrote for Camera Press Ltd. of London and the London Daily Mail. He also did on-the-spot news coverage for the Netherlands Radio Network, as well as television documentaries. In 1966, Mr. Noorbergen was named managing editor in the publications department of the Ford Motor Company.

He has long been interested in phenomena that eludes scientific means of measurements but which nevertheless has been shown to have validity. This interest led to his co-authorship, with Jeane Dixon, of the best-selling book, My Life and Prophecies and The Ark File.