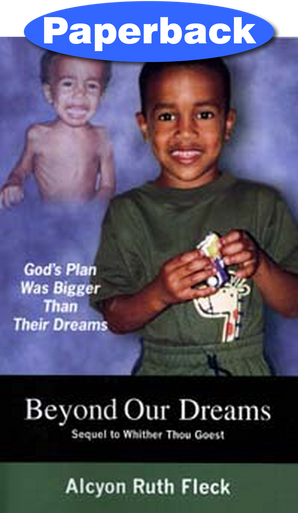 Watching out the window, my heart nearly stopped! The man pulled out a black revolver from his belt, and taking hold of the gate, called "Acerquese, señor." (Come closer, Mr.)

By then I was running for the front door. I had to go around a corner, and nearly slipped on the tile floor. I opened the door and stepped to the edge of the porch, saying in an urgent whisper, "Come in quick! He has a gun!"

Ken whispered back, "I know." He had heard the click when the man cocked it. Ken was backing up but still talking to the guy. When he got to the porch, I had the door open and we both dashed in, locking the door behind us. I had seen him grab the gate as if he were climbing over.

This is just one of the alarming experiences of the mission life of the author. But God was teaching them faith in His promises for protection and guidance. They needed it in their life as missionaries, but even more during the 25 years in founding and directing the program of International Children's Care that proved to go way Beyond Their Dreams.

Since Alcyon Ruth Fleck chose to marry a young theology student and become a pastor's wife and missionary, she had to forgo her desire of a college education. God loves to give good gifts to His children, and the unbelievable gift to her was an honorary doctorate by Walla Walla College in 2002. Her life story will inspire readers to look to their heavenly Father for all of life's needs.