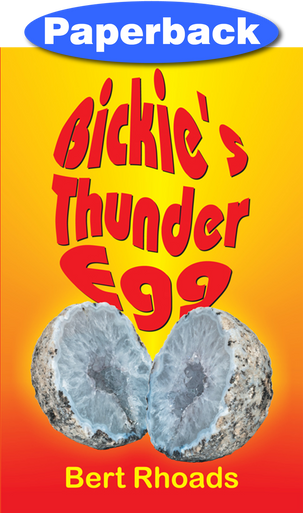 Both boys knelt beside the hole and examined the thing they were trying to dig out. It looked like a huge grey egg about fourteen inches long and certainly a couple feet around its fattest part.

"What do you think it is?" Bickie tapped it with the axe handle.

The boys took the stone to their room to investigate it further, not knowing what they had found.

Scattered throughout the California deserts, hundreds of these stones can be found. According to Indian legend, the noise of thunder is made by a giant bird. They call it the Thunder-bird. Though no bird like this has ever been spotted, when the Indians found these stones in the desert, they assumed they were eggs of this great bird.

Bickie's Thunder Egg is the story of a young boy and his family as they experience trials and close calls with fires, physical injuries, and theft. Through it all they learn to trust God and His plan for their lives, never knowing the answer to many of their problems is tied up with the odd rock they all know as the "Thunder-Egg."