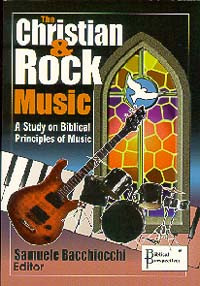 Condition note: Book is lightly used and may be lightly marked or have an owner mark.

In The Christian and Rock Music: A Study of Biblical Principles of Music, seven scholars of six different nationalities take a calm, balanced, and biblical look at the use of popular music for worship and evangelism. With one exception, all the contributors are trained musicians with academic degrees, passionately involved in enriching the worship experience of their congregations through their music.

The book has two major objectives. The first is to help people understand the true nature of the various styles of rock music and the problems arising from transforming rock music into a medium for Christian worship and evangelism. The second objective is to define those biblical principles that should guide Christians in making good musical choices. The aim of this book is not to dismiss all contemporary music as rock, because there are contemporary songs with music and words that are suitable for divine worship. Rather, the aim is to clarify how the music, words, and the manner of singing should conform to the biblical principles of worship music. Contrary to prevailing misconceptions, The Christian and Rock Music shows that the Bible clearly differentiates between the secular music used for social entertainment and the sacred music worthy of the worship of God. There are ample biblical and historical evidences indicating that music and instruments associated with social entertainment were not allowed in worship services in the Temple, synagogue, or early church. The reason is that such music would have tempted believers to turn their place of worship into a place of entertainment, as is happening in some churches today. The authors of this book believe that the same principle applies to the church today.

The Bible teaches that church music is to be God-centered, not self-centered. The notion of praising the Lord for entertainment or amusement is foreign to the Bible. Percussion instruments which stimulate people physically through a loud and relentless beat are as inappropriate for church music today as they were for the worship service in Bible times. At a time when the distinction between sacred and secular music is blurred, and many are promoting modified versions of secular rock music for church use, it is important to remember the biblical call to worship the Lord in the beauty of holiness (1 Chron. 16:20).

The Christian and Rock Music is a timely book for today. It clearly delineates the issues and provides biblical answers to the problems that have caused so many Christians to stumble. For concerned Christians, this book may well be a musical survival kit in our compromising society.