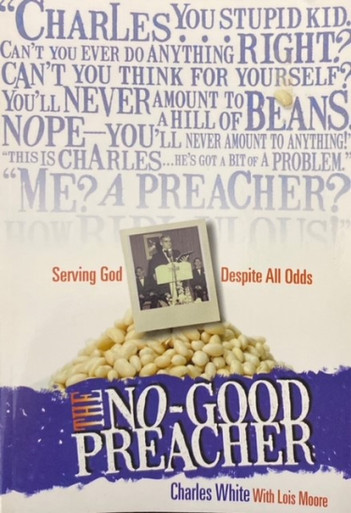 *Condition Note: Book is clean and gently used. May have an inscription inside front cover.*

A scrap of paper stuck out from under the clothing piled on the rickety table. “Take your clothes and do not return,” the note read. “You are no longer welcome here.” This loveless home was all 15-year-old Charles had ever known. Now he was homeless. Charles couldn’t remember his mother ever saying she loved him—she’d had only harsh, demeaning words for the boy who had never been good enough for her. So when she kicked him out after his father died, he left without a backward glance. Somehow he survived on one meal a day for more than a year. He managed to finish high school while working two part time jobs to pay his tuition. He even found a way to give God the bitterness he’d carried all those lonely years. And he discovered that God wanted him to be a preacher—a sentiment not shared by the head of the religion department at his chosen college. Charles wasn’t preacher material, said he. Ah, but when God has something in mind for one of His beloved children, neither the head of the religion department nor all the forces of Hitler’s army can dissuade Him.

CONTENTS How It All Started; Welcome to the World; Triple Tragedy; The Funeral; Out of Control; Still Available; Roots, No Roots; Abandoned and Abused; My First Job; Rebellion; A Voice in the Night; Graduation; Union College Freshman; Mardell; Who Am I?; Family; You're In the Army Now!; In the Medics; Wedding Bells; Off to War!; Behind enemy Lines; You Want WHAT?; Lost in the Night; Trapped; Can We Trust Them; Home at Last; Unexpected Phone Call; Epilogue