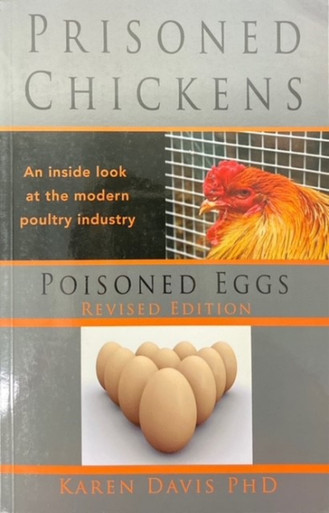 Karen Davis wrote Prisoned Chickens, Poisoned Eggs in the mid-1990s to focus attention on the billions of chickens buried alive on factory farms. The book was a catalyst for animal rights activists seeking to develop effective strategies to expose and relieve the plight of chickens. United Poultry Concerns campaign in the 1990s to reveal the U.S. egg industry s cruel practice of starving hens to force them to molt their feathers and cut the cost of egg production was decisive in shifting advocacy attention to chickens and the hidden causes of Salmonella and Campylobacter food poisoning. This new edition documents what has happened since the book first appeared the waging of high-profile campaigns to get rid of battery cages for laying hens, undercover investigations exposing the appalling cruelty to chickens and turkeys by poultry industry workers, globalization of chicken production and its effect on the environment and spread of avian influenza, and how farm animal sanctuaries have become key players in debunking industry myths with truthful accounts of the sensitive and intelligent birds being brutalized in the name of food. It also effectively explains why these birds are so ill, why eating them makes people sick, and what can be done to cure the pathology of the modern poultry industry.