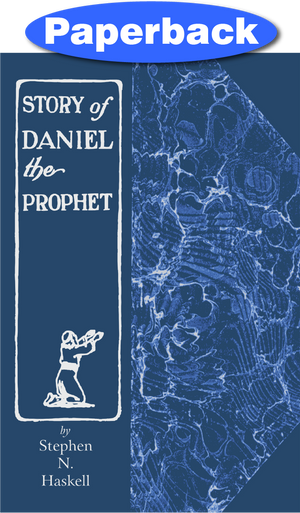 This book is very clean and sturdy.

The book of Daniel is prophecy given by God to Daniel 600 years before Christ that reaches clear down to the end of earth's history. It is especially applicable to our day, pointing out the immediate future. In The Story of Daniel the Prophet, a few of the interesting facts in regard to God's dealings with His people have been gathered into a simple narrative. This book is the result of much prayerful study. It is sent forth with an earnest prayer, that in the hands of the parents it may be the means of making the study of the Bible in the family a blessing to young and old; and that the teacher in the schoolroom may see precious rays of light flashing from its pages, pointing both teacher and pupil to the Great Divine Teacher. We trust that while its simplicity will attract many who might not be inclined to read a deep argumentative treatise, the most studious will find food for thought, and thus become better acquainted with the character of our heavenly Father. Those who wish to enter into more comprehensive study, will find that the marginal references open up many veins of precious ore in the deep mines of God's Word. Throughout the entire book the special providence of God over those who are faithful to Him is brought out in clear contrast to the fate of those who ignore His guiding hand. The truth is the same, whether in the history of nations or individuals. As The Story of Daniel the Prophet goes forth on its mission of love for the Great Master, may it prove a blessing to all classes, young and old, rich and poor, learned and unlearned.