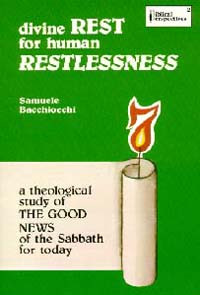 Divine Rest for Human Restlessness is a theological reflection on the relevance of the biblical Sabbath for today. The study shows how the values of the Sabbath provide a divine remedy to such contemporary problems as stress, restlessness, ecological crisis, marital tensions, human rights and competitive pressures. Since its publication, the book has been reprinted nine times in English and has been translated in a dozen languages, helping thousands to find divine peace and rest in their restless lives.