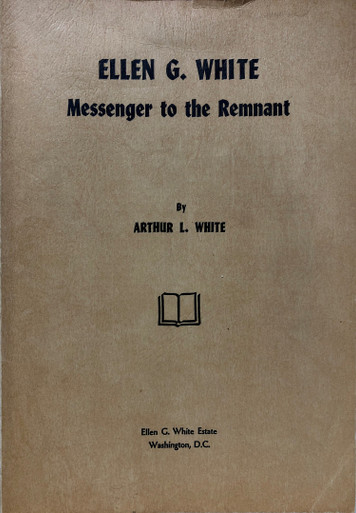 While on the Pacific Coast in 1934, teaching in the Advanced Bible School, L. E. Froom, then secretary of the Ministerial Association, arranged for the preparation of a series of articles on the work of the White trustees in their custody of the Ellen G. White writings. The eight articles, prepared by Arthur L. White, who then served as associate secretary of the Ellen G. White Publications, appeared in the 1935 and 1936 issues of The Ministry. From the standing type a reprint was immediately issued as a popular 24-page brochure, thus making the information available in a single pamphlet.

After the Ellen G. White documents and the work of the trustees were moved to the General Conference office, four additional groups of articles touching on various phases of Mrs. White's life and work, followed in The Ministry. These, too, were continued as permanent documents in brochure form. These five pamphlets have since passed through half a dozen reprintings and have been eagerly acquired by workers and students in the United States and abroad.

To meet the steady continued demand for these brochures, they are now reprinted again, but this time in a single publication for greater convenience in handling. The original arrangement has been maintained, but for convenience the work has been supplied with continuous pagination. Elimination of cover sheets allows the insertion of several features, including "Additional Testimony of Eyewitnesses to the Visions," which will be much appreciated. Certain helpful items also follow Brochure IV, "The Custody and Use of the Ellen G. White Writings." A brief subject index has been added.

With component parts prepared at different times, the publication as a whole lacks somewhat in smoothness and close connections. A certain amount of repetition also occurs, which could not be eliminated without destroying the individuality of the several features. In this new compact form this helpful, carefully documented material is now sent forth on its mission.

Brochure III
THE ELLEN G. WHITE BOOKS
The "Conflict of the Ages Series"
The "Testimonies for the Church"

Brochure V
ELLEN G. WHITE—THE HUMAN-INTEREST STORY
As Others Knew Her
The Homemaker
As a Neighbor
The Writer
The Speaker
The Counselor
A Personal Worker
As a Steward of Means
God's Messenger
The Published Works of Mrs. E. G. White (By date)
Index