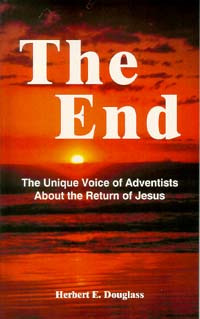 End, The: The Voice of SDA's About the Return of Jesus / Douglass, Herbert Edgar / LSI

This book focuses on how all Christians should relate to the current worldwide emphasis on the end of the world, and it reviews the various conflicting voices within Christianity describing how and when the end will come, including Noah's experiences before the Flood, Jesus' description of people ready for His return, and the practical questions Seventh-day Adventists the world over today are now discussing.

Herbert E Douglass, an associate editor of the Review and Herald, has devoted many years to the pursuit of excellence. His academic studies began at Atlantic Union College, continued at Andrews University, and culminated in a doctorate in theology, conferred by the Pacific School of Religion in 1964. He taught homiletics for eleven years at Pacific Union College and Atlantic Union College; then he served as academic dean and finally as president of Atlantic Union College. He has been at his present post since 1970. Dr. Douglass, father of four, is a member of the Society of Biblical Literature; he has led several tours of the Holy Land and served on the staff that edited The Seventh-day Adventist Bible Commentary.

He is author of Why Jesus Waits; The End; Why I Joined; Faith—Saying Yes to God; If I Had One Sermon to Preach; We Found This Faith; and Should We Every Say, "I Am Saved"?.