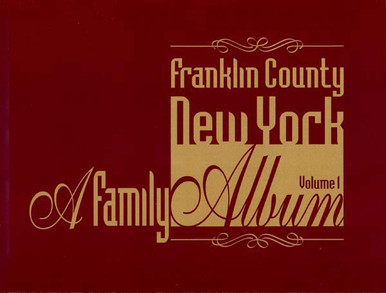 In bygone years a State Senator once stigmatized the county of Franklin as "the Siberia of New York," thereby showing the same lack of knowledge concerning this district that so delayed its settlement. So unfavorably was this section regarded, that when the State set aside thousands of acres for the Revolutionary soldiers, still called "The Old Military Tract," not one acre was taken up. The county is large, having an area of 1,678 square miles, and is not populous, the census of 1920 crediting it with 43,541 inhabitants. But when it is realized that as late as 100 years ago there were only about 4,000 people in the whole section and that the passing of some of the ignorance concerning this region only began some fifty years ago, it shows the vitality of the county that it has grown and ranks with the few agricultural counties that are more than holding their own in this industry. Franklin lies in the extreme northern part of the State, with Canada bounding it in that direction, the St. Lawrence River touching a few miles of one corner, and the counties of St. Lawrence, Essex, Hamilton and Clinton making up the other sides of its borders. Most of the territory was one great pine forest, with intermingled hard and soft woods, when first settled. Lumbering, early potash making, fires have denuded great areas, but there are still thousands of acres of virgin timber. The surface of the county is greatly broken. Hills, mountains, lakes, swamps, and many fertile internals, are found. Many of the lakes are famous, such as the Saranacs, and the rest on elevations above 1,500 feet. Iron and minor minerals are in the hills, but probably will never be utilized. Much of the land from which the pine has been cleared is too poor for paying agriculture, but the more fertile sections are being intelligently handled. The ancestral line of Franklin County is as follows: Albany County, which included all the north part of Maine and all of Vermont; Washington; Clinton, an offshoot, in 1788; Franklin, March 11, 1808. The separation from Clinton came about when it proved irksome to go great distances to Plattsburgh for all legal and some other business. Malone was chosen the county seat and court sessions were held in the "Academy." A new courthouse was erected the next year, which was also the jail and a house of worship; and the present on was built in 1885 at an expense of some $35,000. Certain curiosities of history are attached to the story of Franklin. Like other counties of this part of the State they have a "purchase" to which all deeds for land must be traced. In this case it is the "Macomb" and "The Old Military Tract." The latter has already been mentioned. When the soldiers for whom it was set aside failed to take it, the State sold the land to speculators for about nine pence an acre. Macomb bought about 4,000,000 acres in 1791, including a great area in Franklin. Franklin was one of the principal counties through which the "Underground Railroad" ramified previous to the civil War, Malone being one of the main stations. In the "Fenian Raids" of 1866 and 1870 Franklin was on of the rendezvous. However, none left the county in the advance into Canada of 1866. In the 1870 invasion, Malone, Chateaugay, Fort Covington and Hogansburg were the principal places where arms were assembled. On May 25 of the above year the Fenians penetrated the enemy's country (Canada) to a distance of three miles and two days later met the enemy and promptly retreated in great disorder. Casualties of the war: Canada, none; Fenians, three (slightly wounded).--Richard Frisbie, Hope Farm Press Bookshop, Saugerties, New York