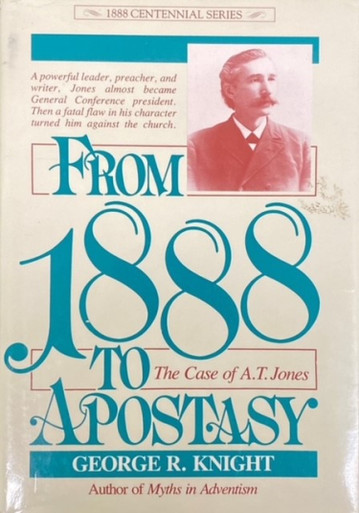 *Condition Note: Book is lightly used and clean. It has an owner stamp inside front cover.*

A T Jones was one of the most fascinating personalities ever to grace a Seventh-day Adventist pulpit. Adventists have always had a curiosity regarding the powerful Jones, who meteorically rose to denominational prominence in 1888 and sank almost as rapidly into oblivion in the early twentieth century.

To examine Jones' life is to study a cross section of Adventist history during one of its most formative and controversial periods. Because Jones was at the center of action, his biography, of necessity, must deal with such issues ad the meaning of the 1888 General Conference session, the problem of 1893 and the delay of Christ's return, the nature of sanctification, the Adventist holiness movement, charismatic gifts, the role of Ellen White, the human nature of Christ, the Adventist crusade against a Christian America, church and state relationships, and the proper function of church organization. Those issues have been at the focal point of Adventist discussion for nearly a century. As a result, the biography of A T Jones is not merely a fascinating story, but is pregnant with contemporary meaning.

Preface
1. Young Man Jones
2. The Loaded Atmosphere of 1888
3. Conflict at Minneapolis
4. Expanding the Battle Zone
5. The Meaning of Minneapolis
6. The National Sunday Law and the Image to the Beast
7. The Great Revival of 1893
8. A Second Adventist Prophet and the Revival Of 1894
9. Total Separation of Church and State
10. The Nature of Christ Seed for a Twentieth-Century
11. At The Pinnacle of Power
12. Christian Anarchy God's Organizational Ideal
13. A Conference President Anyway
14. The Drift Toward Apostasy
15. Love and Hate A T Jones Relationship to Ellen
16. The Bitter Years