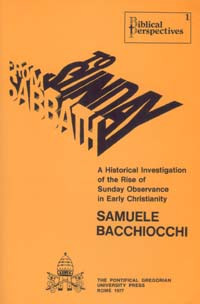 From Sabbath to Sunday / Bacchiocchi, Samuele

How did the change come about from Saturday to Sunday in early Christianity? Can the Sabbath commandment be rightly invoked to enjoin Sunday observance? How can the pressing problem of the secularization of the Lord's day be resolved?

To find an answer to these questions Dr. Samuele Bacchiocchi spent five years at the Pontifical Gregorian University in Rome, examining the most ancient available documents. The results of this investigation are presented in From Sabbath to Sunday.

The investigation establishes that the change from Saturday to Sunday occurred approximately one century after the death of Christ in the Church of Rome, as a result of an interplay of Jewish, pagan and Christian factors. The result of the change in the day of rest and worship was not merely a change of names or of numbers, but rather a change of meaning, authority and experience; a change from a Holy Day into a holiday.

From Sabbath to Sunday has the distinction of being the first book written by a non Catholic ever to be published by a Pontifical press with the Catholic imprimatur (approval). The book has already been reprinted eleven times in English and has been translated in several languages. Hundreds of scholars of different persuasions have praised this book as a definitive treatment of the early history of the Lord's Day.