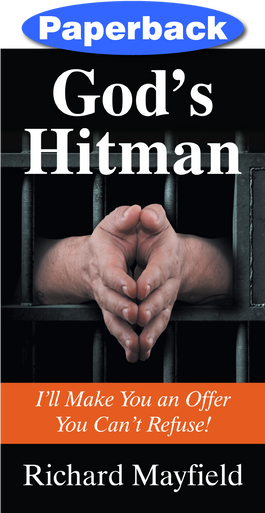 When all looks hopeless in the cycle of addiction, God is still there for you. “Be strong and of a good courage, fear not, nor be afraid of them: for the Lord thy God, he it is that doth go with thee; he will not fail thee, nor forsake thee” (Deuteronomy 31:6, KJV).

Join Richard as he faces the demons of alcoholism, family strife, and guilt, ultimately leading to crime and prison. He reaches the end of his rope as they say, and is ready to give up, but eventually realizes that he has a choice that he can make that changes his life. Once he admits his need for something more than himself, he finds salvation in God’s Word and the support he needs in Alcoholics Anonymous.

Richard Mayfield spent his life trying to look good at all costs. Unfortunately, when you are an alcoholic, things ultimately fall apart. It took being sentenced to prison in the Colorado state prison system at seventy-two years old to face his weaknesses and turn to God by opening His Word for the first time and finally giving his life to our Savior.

After growing up in New York state, Richard has spent his later years in Colorado. He and his lovely wife, Elaine, enjoy living in God's "backyard" of Montana—everywhere you look is a reminder of God's majesty and love. He actively works with addicts in a Christ-centered 12-step program called "Celebrate Recovery" at his local Seventh-day Adventist church in Dillon, Montana.