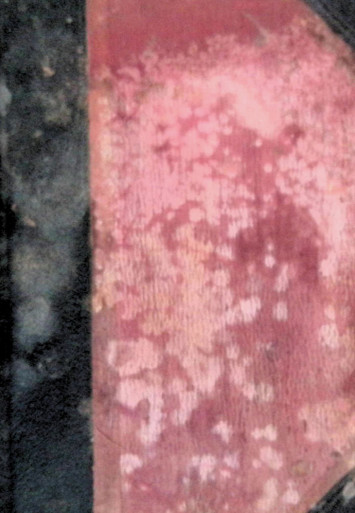 *Moisture damage on cover and inside the book itself. The book is very clean and well kept inside with a damp stain along the bottom of a section of pages.*

This volume presents the most wonderful and intensely interesting history that has ever been written of the great conflict between Christianity and the Powers of Darkness. The period of history covered is one of the deepest interest to all classes of readers. Beginning with our Lord's great prophecy given while viewing Jerusalem from the Mount of Olives, in which He outlines the history of the whole dispensation, it sketches the fulfillment. It calls our attention to the bitter persecutions of the Christians in the first centuries, and notes the rise and growth of the Papacy. Considerable space is given to the life, work, and influence of later reformers and great religious leaders, and this is followed by chapters treating upon The Origin of Evil, The Agency of Evil Spirits, The Snares of Satan, and the Judgment.

The closing chapters give a vivid picture of the warfare of the church, her final redemption, and vividly describe the triumph of the people of God, the destruction of Satan and all his followers, and the renewing of the earth, which ends the awful controversy between the Son of God and the Powers of Darkness.

1. Destruction of Jerusalem
2. Persecution in the First Centuries
3. The Apostasy
4. The Waldenses
5. John Wycliffe
6. Huss and Jerome
7. Luther's Separation from Rome
8. Luther Before the Diet
9. The Swiss Reformer
10. Progress of Reform in Germany
11. Protest of the Princes
12. The French Reformation
13. In the Netherlands and Scandinavia
14. Later English Reformers
15. The Bible and the French Revolution
16. The Pilgrim Fathers
17. Heralds of the Morning
18. An American Reformer
19. Light Through Darkness
20. A Great Religious Awakening
21. A Warning Rejected
22. Prophecies Fulfilled
23. What Is the Sanctuary?
24. In the Holy of Holies
25. God's Law Immutable
26. A Work of Reform
27. Modern Revivals
28. The Investigative Judgment
29. The Origin of Evil
30. Enmity Between Man and Satan
31. Agency of Evil Spirits
32. Snares of Satan
33. The First Great Deception
34. Spiritualism
35. Character and Aims of the Papacy
36. The Impending Conflict--Its Causes
37. The Scriptures a Safeguard
38. The Final Warning
39. "The Time of Trouble"
40. God's People Delivered
41. Desolation of the Earth
42. The Controversy Ended
Appendix
Biographical Notes
Scriptural Index
General Index