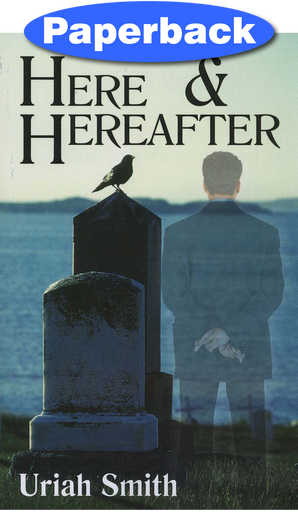 Here and Hereafter, originally written in 1873, deals with whether or not the dead are conscious, the soul is immortal, and the wicked will be eternally tortured. This book provides comprehensive coverage of the disputes over these teachings; almost every relevant text is brought to bear on the controversies at issue. It deals solely with biblical interpretation on the doctrines concerning the state of the dead. Using Scripture alone, Smith decisively destroys the doctrines of the immortality of the soul and eternal torment. All people on either side of the dispute, whether they agree or deny that people have souls that go to heaven, hell, or purgatory upon death, will find this book spiritually profitable to read.

Uriah Smith dedicated more than 50 years of his life to the Seventh-day Adventist movement. He was born in 1832 in West Wilton, New Hampshire. He attended Phillips Exeter Academy from 1848 to 1851. He joined his sister, Annie, the writer of ten hymns included in today's Seventh-day Adventist Church Hymnal, in 1853 at the Review and Herald where he became the editor in 1855. He maintained an almost unbroken relationship with the Review and Herald up until the time of his death in 1903.