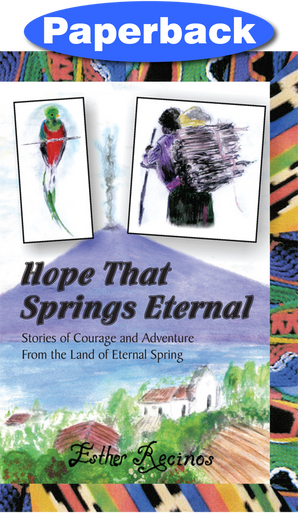 Esther Recinos has a passion for people and a love for her adopted country of Guatemala, "The Land of Eternal Spring." Although Esther was born in the United States, when she was a little girl her parents moved south of the border to become missionaries in Mexico and Guatemala. Esther fell in love with the landscape, the people, and the adventure there-and she easily adopted Guatemala as her second home. Hope That Springs Eternal is the life story of an adventurous girl who grew up to become a woman of God with a heart for helping others and sharing Jesus' love with those around her. The book is full of thrilling stories about Esther's childhood and adulthood. Severe illnesses, clinic duty and nursing responsibilities, kidnappings, guerrilla warfare, love and marriage, evangelistic meetings, and jungle treks are just a few of the many stories that reveal God's divine protection and guidance in the mission field of Guatemala. Experience the sights and sounds, pain and sorrow, and hope and salvation in the Central American country of Guatemala through the eyes of Esther Recinos in Hope That Springs Eternal.