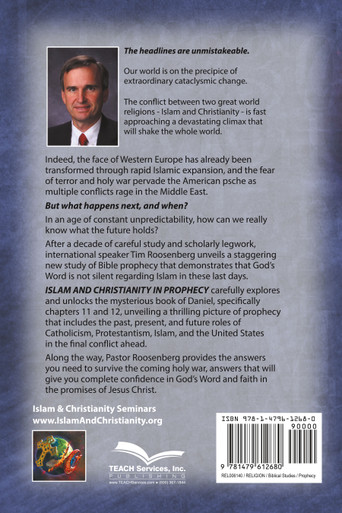 The headlines are unmistakable. Our world is on the precipice of extraordinary, cataclysmic change. The conflict between two great world religions—Islam and Christianity—is fast approaching a devastating climax that will shake the whole world.

Indeed, the fact of Western Europe has already been transformed through rapid Islamic expansion, and the fear of terror and holy war pervade the American psyche as multiple conflicts rage in the Middle East.

But what happens next, and when? In an age of constant unpredictability, how can we really know what the future holds?

After a decade of careful study and scholarly legwork, international speaker Tim Roosenberg unveils a staggering new study of Bible prophecy that demonstrates that God's Word is not silent regarding Islam in these last days.

Islam and Christianity in Prophecy carefully explores and unlocks the mysterious book of Daniel, specifically chapters 11 and 12, unveiling a thrilling picture of prophecy that includes the past, present, and future roles of Catholicism, Protestantism, Islam, and the United States in the final conflict ahead.

Along the way, Pastor Roosenberg provides the answers you need to survive the coming holy war, answers that will give you complete confidence in God's Word, and faith in the promises of Jesus Christ.

"From the ancestors of Abraham sprang the world's two largest religions today, Christianity and Islam. While there is still much that is unknown, it is hard to deny that Islam will have a significant role in last day prophecy. With Scripture, history, and reason, Pastor Tim Roosenberg presents a compelling scenario for the prominent place of Islam in future prophecy." —Doug Batchelor, Amazing Facts International

The King of the North: Roman to Holy Roman Empire

The Actors and Powers of the Time of the End

The United States in Bible Prophecy

The Role of Europe and China

The Role of Israel in Prophecy

Islam the King of the South

Tidings From the East and the Mark of the Beast

When Michael Stands Up

The Worst-ever Time of Trouble

The Millennium and the New Earth