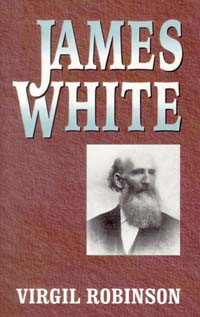 At the time of this writing little was known of the life of James White, whose early passing brought to the forefront the well deserved respect and admiration of his wife, Ellen G White. "To provide interesting, accurate, and enlightening account of James White," Virgil Robinson was asked to dig into the early records and write this volume. Mr. Robinson, a well-known and respeced writer in Adventist circles, had abundandt documents as well as materials at his fingertips for research. He, by birth, was the great-grandson of Ellen and James White on his maternal side. "This well written account, constructed from the documents of the time, makes that noble, yet very human man, live. May the knowledge of his dedication, his vision, his sacrifice, and his innate confidence in the triumph of the church, inspire the generation who must carry to its conclusion the work he, under the leading of God's Spirit, began so well."

Virgil E. Robinson grew up in Africa. Following a family tradition, he later gave twenty-five years to Adventist missions in such places as Malamulo Kamagambo, and Helderberg College. His grandfather had gone to Africa in 1891. Now Robinson's two sons are there. Since 1961 he has worked at the Home Study Institute in Washington, D.C. Robinson says he would rather climb than almost anything. While living near Cape Town, South Africa, he manged to make the 3,600 foot ascent of Table Mountain thirty-five times. Author of Mighty Mary, Adventurous Years, Hudson Taylor--Man of Faith, Desert Track and Jungle Trail, Brave Men to the Battle, JN Andrews: Flame for the Lord, Cabin Boy to Advent Crusader, Only in Africa, The Judsons of Burma, William Booth and His Army, The Restless Missionary, and Ye Shall Reap.