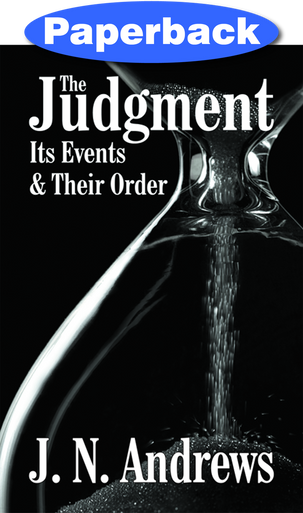 John Nevins Andrews in the late 1800s released this classic study on The Judgment, outlining its events and their order. This work covers the following points: "The Investigative Judgment," "Examination of the Books," "God the Father the Judge," "Offices of Christ," "Messages to the World," "The Sanctuary in Heaven," "The Crowning of Christ," "The Executive Judgment," and "The Saints Sitting in Judgment."

Andrews clearly explains and disproves many long-held misbeliefs about God's work to remove sin from His people. His greatest desire was to explain Christian beliefs from the scriptures in a logical and easily understandable manner.

John Nevins Andrews (1829-1883) was born in Poland, Maine. He "found the Saviour" at the age of 13, became a minister at the age of 21 and was ordained at 24. He claimed the ability to reproduce the New Testament from memory. He could read the Bible in seven different languages. He held many church offices, including editor of the Review & Herald, president of the General Conference, and president of the New York Conference. During the Civil War, he went to Washington, D.C., and explained that participation in combat was contrary to Christian principles. His work was rewarded when the government allowed draftees to apply for noncombatant service. In 1874 (two years after his wife died), he took his family to Switzerland as overseas missionaries and while there he started the magazine Les Signes des Temps. This magazine covered a wide range of subjects including world events, prophecy, Bible doctrines, and health. He died prematurely in Europe, nine years after his arrival there. Andrews University, located in Michigan, was named in honor of him in 1960.