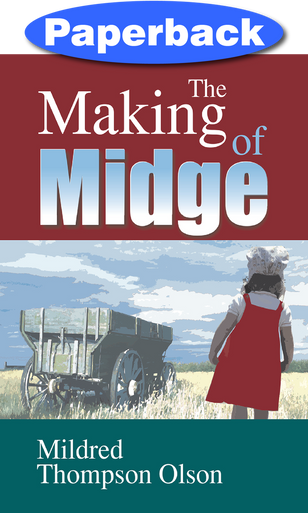 Though most people aren't aware of the fact, South Dakota really is the center of the world. At least that is what Mildred Thompson thought until she entered the fourth grade. It was here, surrounded by a simple farming community and her seven siblings, that "Midge" spent her early childhood during the 1920s and 30s.

The Making of Midge tells the exploits of a young girl whose insatiable curiosity and knack for trouble earned her the title of one of the "Katzenjammer Kids" at the tender age of two. Throughout her childhood, she not only lived, questioned and explored life to the fullest, but learned valuable lessons of forgiveness, humility, and love as well.

Experience with her a childhood filled with adventure as she almost burns alive from a lit Christmas tree, endures childhood illnesses, sets the prairie afire to catch gophers, almost loses the family farm, builds a car out of a washing machine and is part of a miracle after her brush with death from appendicitis. Through it all, she learns more about a God that loves and cares about her, and begins a life-long desire to become an overseas missionary. As you read this book, you will see how her family and church helped Jesus make Midge.

This is the first book in a four-book series on the life of Midge. Check out Midge on Her Own, Midge in Lebanon,and Midge and Wayne in the Middle East.