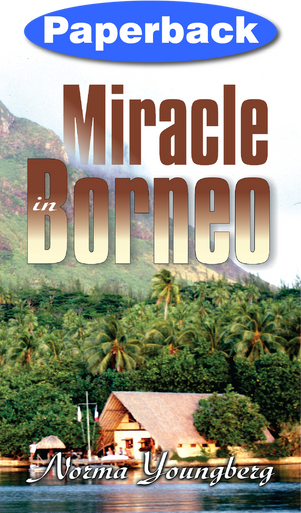 Nestled in the mountain jungles of Southern Borneo, near the Tatau River, lives the village of Chief Rayang. For years they had existed without any western influence, relying on the spirits to guide their lives and the island to support them. When new Christian teachers arrive on the simple island, the tribe's way of living is altered. As the months pass, the gentle influences of the missionaries helps transform the bloody, skittish hearts of the local tribesmen into peaceful, grounded Christians. As local warriors like Deckie become Christian leaders, the miracles on this small island are compounded in the hearts of these earnest natives. Trouble brews in the form of the tribe's witch doctor Peekew, who wants nothing to do with the Christians and attempts to use supernatural effects to drive them off the island. Through it all, the islanders learn about a God who not only cares about them, but loves them, and a way of life which maximizes their potential.

Miracle in Borneo is the story that emphasizes the importance of the work of native evangelists in oversees missions. Few realize how much the expansion of gospel work in foreign lands depends on these local laborers. There are hundreds of humble souls whose devotion and courage constitute the front line of advance against heathenism.

Author Norma R Youngberg was no stranger to mission work. As a new bride, she worked with her husband in Malaya, Singapore, British North Borneo, Sarawak, and Indonesia. They are known as one of the pioneer missionaries among headhunters on the Tatau River of Sarawak.