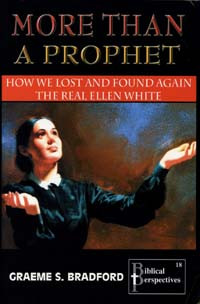 More than a Prophet was born out of the raging controversy of the credibility of Ellen White as an inspired writer. Books, videos, and thousands of Web sites are attempting to destroy the credibility of the gift of prophecy manifested in the ministry and writings of Ellen White. Surprisingly, most of the material attacking Ellen White has been produced by former Adventists, some of whom were church pastors.

To respond to the many attacks against Ellen White, Professor Graeme Bradford spent twenty years of his life examining and digesting the writings of Ellen White in the light of the manifestation of the gift of prophecy in biblical prophets. By examining the human side of Bible prophets as revealed in scripture, Bradford shows that the problems they encountered were not much different from the criticism brought against Ellen White.

This book defends the true nature of Ellen White's ministry by showing how her ministry was perceived by herself, her son "Willie," and church leaders who worked closely with her. These leaders, including the General Conference President A.G. Daniells, expressed their fears at the 1919 Bible Conference that the church was heading in a wrong direction in its understanding and use of her ministry. Unfortunately, their worst fears were realized as cultural pressures influenced the church to promote an unrealistic understanding of her ministry. Fortunately, today Adventism has returned full circle by coming back to a more biblical understanding of her gift. This intriguing story is revealed in this book.

This book has been long overdue and will do much to restore confidence in the validity of the gift of prophecy manifested in the writings, preaching, and teachings of Ellen White—a woman who has left such a rich legacy not only for the Seventh-day Adventist Church but for the world at large.

Dr. Graeme Bradford has served the Seventh-day Adventist Church with distinction as a pastor, evangelist, and professor in the theology department of Avondale College. He has conducted seminars in many parts of the world, helping thousands to better understand and experience biblical truths.

He has written numerous articles, prepared a Bible course for global mission, and edited three magazines on archeology and the Bible. Recently he authored two books entitled "Prophets are Human" and "People are Human: Look at what they did to Ellen White!" At the request of the South Pacific Division, he is preparing a Revelation Seminar course together with Professor Jon Paulien.

Dr. Bradford earned a bachelor's degree in theology from Pacific Union College; a master's degree in religion from Andrews University, and a doctor of ministry degree from Trinity International Divinity School in Deerfield, Illinois. Though he is currently retired, his ministry of writing, lecturing, and reclaiming former Adventists continues full time with passion for truth and people.