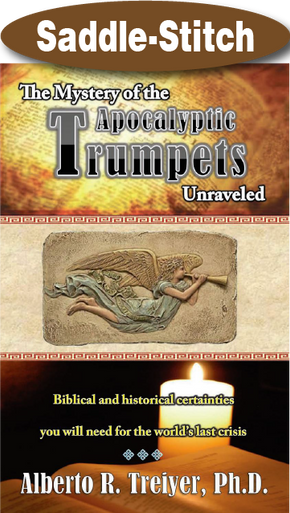 In July of 2008, Dr. Treiyer was interviewed by 3ABN regarding his book: Seals and Trumpets: Biblical and Historical Studies. As a result of that interview, he was invited to be one of the speakers for a theological symposium on the Trumpets at the headquarters of 3ABN in February of 2011. At that time, Pastor Joe O’Brien (pastoral staff at 3ABN), asked him about the possibility of summarizing his work into a small book. To accomplish this Dr. Treiyer had to rely on most of the vast documentation he had gathered and published in the former book. He knew such a summary would allow him to offer new arguments and touch on other important points of the prophecy not yet fully developed. Therefore, this new work, The Mystery of the Apocalyptic Trumpets Unraveled, should not merely be seen as a summary of the former work, but rather as a complementary document. In some ways, it can also be seen as a more definite answer to some questions usually raised today concerning this topic.