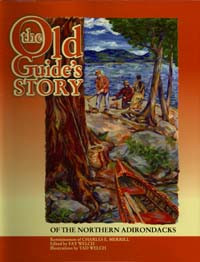 Reminiscences of Old Guide—Famed thru North Country
In 1930 the Editor of the Malone Evening Telegram (Malone, New York) wrote:

At rare intervals there comes to a newspaper office opportunity to print a manuscript of unusual interest and appeal.
Such a one is the reminiscences of Charles E. Merrill, for 30 years an Adirondack guide, a member of one of the oldest and best know families of the North Country.
Under the title The Old Guide's Story, the Telegram will print Mr. Merrill's book.

Trained in the great outdoors rather than in the schools, Guide Merrill nevertheless has the born gift of writing. But more important than this, is that he has a real story to tell—the great epic of the struggles of the pioneers in the woods, the fight with the elements, the joys and sorrows of a primitive mode of life.
His father, Darius, of whom he has much to say in his story, was a famous guide in the early days when the Adirondack region was first becoming known to sportsmen. His grandfather was one of the first settlers in the Chateaugay Lake Country, in the northern foothills of the Adirondacks.
Mr. Merrill, the youngest son of Darius, naturally followed his father's profession and became one of the best known guides in this section.
Although sixty-five years of age he is as strong and active as most men in the prime of life.

In leisure time, he reads voraciously and he has a keen understanding of men as well as of the wild creatures of the wilderness. He has a philosophy of his own, and it must be good, because it has brought him peace, contentment and the respect of his fellow men.

You will not want to miss any of Mr. Merrill's fascinating story.

Charles E. Merrill (1863-1935), chronicler of much of the early history of Chateaugay Lake, NY, was a quiet, thoughtful, kind, and courteous gentleman, one of nature's noblemen. He loved the woods and lakes, and all the untamed and unspoiled things in nature. He loved to commune with the creatures in their native environment, and to walk his solitary way through the aisles of the cathedrals of trees where he was wont to worship.

He was a member of the pioneer family for whom the community of Merrill was named. His father was Darius Merrill, famous as a hotel proprietor, woodsman, and guide when sportsmen first began to invade the Adirondacks. Charles E. Merrill followed in his father's footsteps and likewise became known as one of the most reliable guides in the North Country.