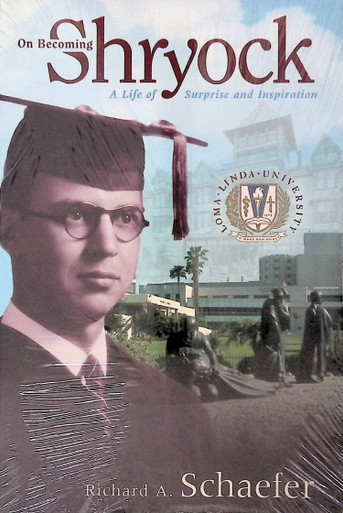 When a very young Harold Shryock stepped off the train at the Loma Linda station in 1910, he could not have imagined that someday he would play a major role in the development of a world-renowned institution. Nor could he have foreseen an organization that would produce tens of thousands of alumni, men and women trained to bring healing to body, mind, and soul.
It is a story of inspiration - and surprises. Of those who know the name Harold Shryock from the 13 book and more than 600 magazine articles he wrote for Seventh-day Adventist publishers, few know of the personal struggles and challenges he faces as a young man. A mysterious illness. Dropping out of medical school (twice) - and becoming a bread salesman. Nearly being electrocuted during his internship.
This is a story of a Providence that shaped the early history of Loma Linda University in general and the life of Harold Shryock in particular.
And it is a great love story that spanned 63 years. Two people from completely different backgrounds - sheltered Harold and orphaned Daisy - committed to following where that Providence led.
Master teacher and college administrator. Prolific author and public speaker. Trusted counselor and faithful friend.
In a life that spanned nearly a century, Harold Shryock influenced a world.