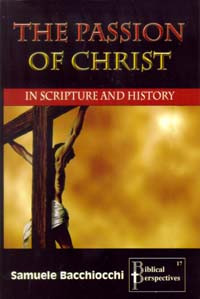 This book has two major objectives. The first is to provide the information necessary to help people distinguish between what is biblical and what is unbiblical in Gibson's portrayal of Christ's passion. The second objective is to help Christians of all persuasions more fully appreciate the centrality, necessity, and achievements of the cross. May a thoughtful reading of this book lead many people to appreciate more fully the passion of Christ as His passionate love to redeem us from the penalty (Gal 3:13) and the power of sin (Titus 2:14) through His sacrificial death.

Introduction
1. History of the Passion Plays
Questions Raised by The Passion
Gibson Adheres to the Traditional Passion Plays
The Objective of This Chapter
Origin and Development of the Devotion to Christ's Passion
The Origin of the passion Plays
Christ's Brutal Suffering to Satisfy Divine Justice
The Prominent Role of Mary
The Hostility of the Jews Toward Christ
Conclusion
Endnotes

2. The Theology of the Passion Plays
The Objectives of This Chapter
The Devotion to Christ's Passion
The Passion and the Catholic Mass
The Satisfaction Views of the Atonement
The Co-Redemptive Role of Mary
The Portrayal and Impersonation of Christ
The "Christian" Theology of Anti-Semitism
Conclusion
Endnotes