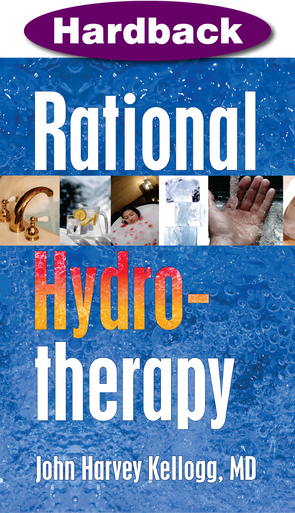 Sorry but this item is currently unavailable.

Please check back at a later stage.

Water, applied externally or internally and at varying temperatures, is an agent which more fully than almost any other cooperates with the healing powers of the body in resisting the onset and development of pathogenic processes. There is no other remedy by which the movements of the blood and the blood supply, both general and local, and in fact every form of vital activity, may be so readily controlled as by hydriatic application.

The general order of the book is as follows: First, a short historical sketch and an overview of the physical, anatomical and physiological facts that are especially related to the subject; second, a study of the physiological effects of hydriatic application, hydrotherapy equipment and practices; third, a description of the technique of all useful hydriatic procedures; and fourth, a section on hydriatic prescription-making in which is presented a brief summary of the indications presented by the diseases most commonly encountered in practice and of the hydric measures required to meet the same and specific information on how hydriatic measures can regulate blood pressure and cardio-vascular disorders.

John Harvey Kellogg was born February 26, 1852, into a fledgling Seventh-day Adventist family in Tyrone, Michigan. Four years later the Kelloggs moved to Battle Creek—destined to become the Breakfast Food Capital of the World as the result of John Harvey's inventive mind. Taught by his brothers to read before starting school, he also learned to play the organ, piano, and violin. As an apprentice in the church's Review and Herald Publishing House, John Harvey read a steady stream of health reform articles and books coming off the press.

Kellogg began his early career as teacher but soon was drawn to medicine, graduating from New York's Bellevue Hospital Medical School, and ultimately became the Midwest's pre-eminent health educator. He coined the term "sanitarium" to distinguish the teaching role of his hospital from the average medical institution, expanding it to encompass more than 400 acres and employing a staff of 1,000 to care for 700 patients. He promoted hydrotherapy, massage, a vegetarian diet, and eliminated coffee, tea, tobacco, and alcohol. He created "Granola," corn flakes, peanut butter, almond milk, gluten meat substitutes, Cereal Coffee, and 70 other food inventions. He devised a series of surgical instruments including a heated operating table, the first dynamometer, pneumograph, menthol inhaler, the electric blanket, the electric light bath cabinet, and a complete line of mechanical physical fitness exercising equipment. He established a School of Nursing, a Normal School of Physical Education and Economics, the Battle Creek College, The American Medical Missionary College, the Race Betterment Foundation, the Sanitarium Equipment Company, and, his most famous, the Battle Creek Food Company. His 91-year long life was devoted to promoting what he called "biologic living."