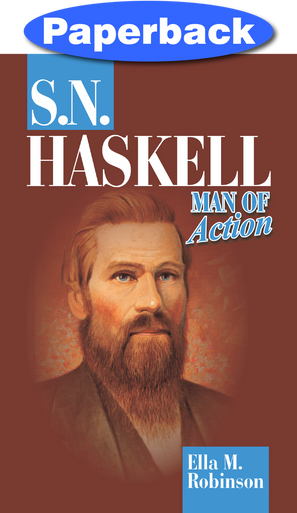 Among the most colorful of the early Seventh-day Adventist church workers was Stephen Nelson Haskell. A self-made man, fearless, and endowed with ingenuity, courage, and vision, Haskell led in a number of enterprises that were accepted and established by the denomination. He was the first to make an around-the-world trip in the interest of Adventist missions, taking almost two years. He was a leader in city mission work, and we think of him as the father of the tract and missionary societies from which developed the Book and Bible Houses and two departments of the church—Publishing and Home Missionary.

Ella May Robinson is granddaughter of James and Ellen White. She was born in California and returned there after living on four continents. She spent part of her childhood in Europe, went to college in Australia, and after her marriage to Dores E Robinson lived eight years in Africa. She filled the varied roles of colporteur, church school teacher, missionary wife, and mother of two missionaries.

Author of Choma, a Boy of Central Africa, Stars in Her Heart, When Jesus Was Here, Lighter of Gospel Fires--Story of J N Loughborough), and Stories of My Grandmother.