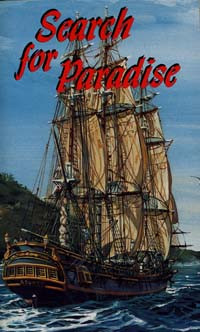 Loaded with weapons, the mutineers headed to the forward laddersay and started up it. But, looking down, Hayward saw their guns and, in awed terror, demanded to know what was happening. He was told the captain had commanded the men to exercise at dawn.

Not believing the yarn, Hayward started aft toward Bligh's compartment to awaken him. Nor far off, Willim McCoy, tattooed and scarred from knife fights, had been loading his musket on deck. Immediately he banged it heavily three times on the deck - to warn his companions below to get up on deck quick!

Just then, Christian emerged from the hatchway, carrying a musket with a fixed bayonet and an ammunition box in his left hand and a cutlass and pistol in his right. With the men behind him watching Hayward, Fletcher now slowly descended the aft ladderway.

This book depicts the most famous mutiny in British Naval History.