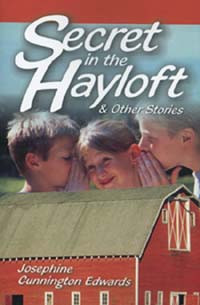 Secret in the Hayloft and Other Stories / Edwards, Josephine Cunnington / Paperback / LSI

Johnny crept into the backyard and looked around to see that no one was watching, and then vanished into the shed where the fireplace logs were stacked neatly along the wall. He had a guilty look on his face. He stood up as straight as he could under the low, slanting ceiling, and pulled a half-empty package of cigarettes out of his pants pocket. Ever since he had met Phil, the poor kid down the street, Johnny's conscience had been pricking him for a couple of new habits he had picked up. The sneering words of Phil kept ringing in his ears: "You're just like a jailbird, and yer pop and mom are the jailers."

Secret in the Hayloft and Other Stories tells the story of Johnny and his coming-of-age-search to discover his values and morals in a surge of peer pressure. Author Josephine Cunnington Edwards weaves entertainment with character-building principles for today's young people in this story of Johnny and more than a dozen other short stories in yet another of her popular titles. Read also about Eleanor, the little threader of needles, and Clara's search for the truth. This collection of stories is sure to amuse and teach both children young and old for ages to come.

Josephine Cunnington Edwards is a woman of no little versatility. During her lifetime, she has been a missionary to Africa, has written more than twenty books about missions, history, children, and the home. She has collaborated on three TV shows, and somehow also found time for her personal hobbies such as her doll and dish collection, Siamese cats, oil painting and travel.

Read also Swift Arrow, Reuben's Portion, Children Can Be Taught, Unto a Knowledge of the Truth, Bricks for Sale, I Saw Thee Philip, Malinki of Malawi, Kamwendo, Lydia - a Seller of Purple, Secret in the Hayloft, And I Saw John, With an Holy Calling, The Enchanted Pillowcase, and Johnnie, Come Home.