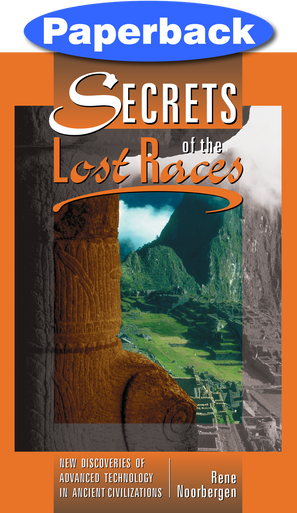 An increasing number of historical and archaeological finds made around the world have been classified as "out-of-place artifacts" (ooparts). They have been called this because they appear unexpectedly among the ruins of the past with no evidence of a preceding period of development; their technological sophistication seems far beyond the capabilities of ancient peoples.
Drawing on the literature and art of the Chaldeans, Sumerians, Babylonians and others, Rene Noorbergen's contention is that a superior race of man was responsible for these scientific marvels that bear testimony to a civilization with technology comparable to our own.

Rene Noorbergen was born in Groningen, the Netherlands, and educated at La Sierra College in California, and at the University of Groningen.

His writing assignments have been divided between Europe and the U.S. He was chief correspondent for the U.S. Army's The Soldier Illustrated and West Coast correspondent for many European magazines, and he wrote for Camera Press Ltd. of London and the London Daily Mail. He also did on-the-spot news coverage for the Netherlands Radio Network, as well as television documentaries. In 1966, Mr. Noorbergen was named managing editor in the publications department of the Ford Motor Company.

He has long been interested in phenomena that eludes scientific means of measurements but which nevertheless has been shown to have validity. This interest led to his co-authorship, with Jeane Dixon, of the best-selling book, My Life and Prophecies and The Ark File.