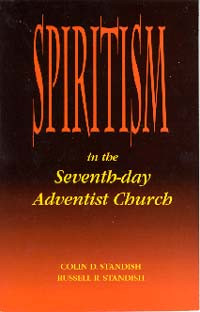 The authors believe that every deviation from truth has its root in spiritism. They take a broad concept of spiritism to include idolatry, paganism, humanism, New Age philosophy, Catholicism, Satanism. They also explore some surprisingly "respectable" forms of spiritism which are designed especially for the more wary Christian. The purpose of this book is to reveal the frightening inroads of spiritualistic theory and practice that has become deeply embedded within much of contemporary Seventh-day Adventism. This book also looks at simple solutions that are absolutely essential and necessary to bring the Seventh-day Adventist Church back to the purity of the religion of Jesus Christ.

Colin and Russell Standish were born in Newcastle, Australia, in 1933. They both obtained their teaching diplomas from Avondale College in 1951. They were appointed to one-teacher Seventh-day Adventist primary (elementary) schools in rural areas of New South Wales, each teaching for three years.

Both in 1958 completed a major in history and undertook an honors degree in psychology at Sydney University in the field of learning theory. Colin continued in this area, obtaining his Master of Arts degree with honors in 1961, and his Doctor of Philosophy in 1964. In 1967 he completed a Masters Degree in Education.

Russell as a Consultant Physician (Internist) has held the posts of Deputy Medical Superintendent of the Austin Hospital, University of Melbourne (1975-1978), President of the Bangkok Adventist Hospital (!979-1984), Medical Director at Enton Medical Centre, England (1984-1986), President of Penang Adventist Hospital (1986-1989), and Director of Health Services in the Southeast Asia Union (1989-1992). Since 1992 he has been speaker and editor for Remnant Herald.

Both Colin (1970) and Russell (1980) were ordained to the Seventh-day Adventist ministry. Both have been appointed delegates to General Conference Sessions Colin in 1975 and Russell in 1980 and 1990. They have co-authored forty books.