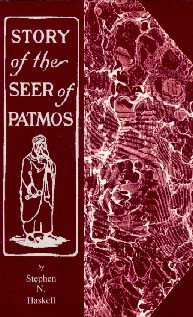 Story of the Seer of Patmos, The / Haskell, Stephen N / Paperback / LSI

The book of Revelation pronounces a blessing upon everyone who "reads" or even "hears" it read. Yet, many treat it as a mysterious book that should not be read and cannot be understood. S. N. Haskell has opened the book of Revelation up in an easily read style that explains it and its relation to our day. This facsimile, originally printed in 1905, makes an excellent study book for young and old.