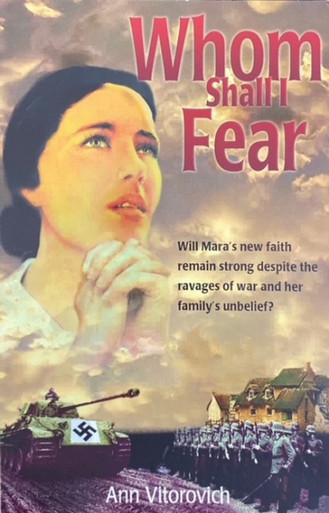 *Condition Note: Book is in like new condition. Has owner marks.*

How do you pick up the shattered pieces and move on, when you life is being torn apart? Is there something, or Someone, you can really believe in, and depend on, to get you through?
For Mara, life was a literal war zone. Her true story takes us back in time to battle-scarred Serbia in World War I. Violence ripped apart Mara's family...and her heart. When peace comes at last, Mara seeks a new beginning and settles into a simple country life with Ilija and their growing family.
But a passing remark stirs up a new conflict - this time, in Mara's conscience. The church of her youth had always provided an oasis from the world's chaos, and Mara never questioned its teachings. There she had found truth - but was it really divine? Or, had humans somehow tempered with God's law that was written in stone with His own hand?
Mara determines to seek the answers in the Book she reveres as sacred, but had never opened and read for herself. In its pages she finds a treasure trove of truth, and discovers the eye-opening answers to her many questions about life on this earth, and beyond. Not only does she find out "Why," but "Who." Mara meets Jesus, whose love she could trust in her life.
When World War II erupts, the Nazi war machine rampages through Servia on a ruthless mission of destruction. Will Mara's faith sustain her family in their darkest hour?
Whom Shall I Fear is a powerful book that will bring you courage and help you not just survive, but find hope and victory in the battles of life.

Born and raised in New York City by Croatian parents, Ann Vitorovich has published several articles in magazines such as Insight, Adventist Review, and Signs of the Times. Ann attended Columbia Union College and has worded as both a legal and executive secretary. Ann and her husband, Voya, live in Arizona and have one son, George, a professional artist.