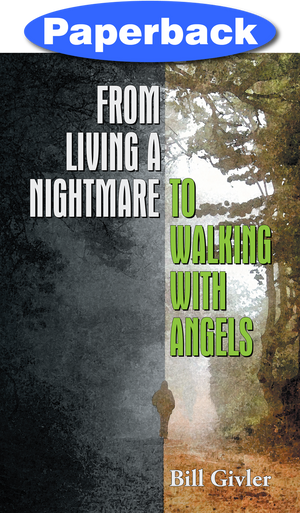 From Living a Nightmare to Walking with Angels / Givler, Bill Jr. / Paperback / LSI

It all seemed so innocent and normal at first, but the more Bill dabbled with the supernatural, the more the devil tightened his grasp on Bill’s soul.

From Living a Nightmare to Walking With Angels chronicles Bill Givler’s personal story of the danger of mixing a basic knowledge of God with the powers of darkness and the spiritual journey he embarked on when he realized that God was not behind the supernatural things that were happening to him.

Bill shares the texts that inspired him and led him down a path toward discovery of such Bible truths as the state of the dead, the seventh-day Sabbath, and Christ’s second coming. Bill’s life-changing story reminds all who hear it about the reality of the war between God and Satan.

Bill Givler is a Bible worker who lives in California and loves to meet new people and introduce them to his best friend—Jesus. Bill hopes that his story will touch lives and show others that all things are possible through Jesus.