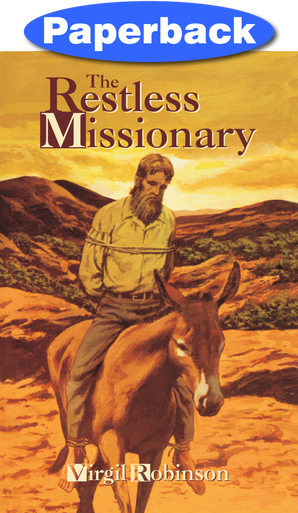 The Restless Missionary chronicles the extraordinary adventures of Joseph Wolff. At the tender age of eight, while listening intently to his father, a rabbi, discuss "the glories of the coming Kingdom," Joseph became very excited. His curiosity is piqued when he learns that the Messiah was Jesus contradicting what he learned from his fate. This book is Wolff's story.

The indomitable Joseph Wolff, armed with a Hebrew Bible and an unquenchable thirst for the truth, begins a journey that includes a religious conversion. Punctuated by life-threatening situations, each chapter seems to test his newfound faith. A defiant Wolff is determined to spread "The Word" despite others who encourage him, for his own safety, to reconsider his mission.

Virgil E. Robinson grew up in Africa. Following a family tradition, he later gave twenty-five years to Adventist missions in such places as Malamulo Kamagambo and Helderberg College. His grandfather had gone to Africa in 1891. Now Robinson's two sons are there. Since 1961 he has worked at the Home Study Institute in Washington, D.C.

Hobbies? Robinson says he would rather climb than almost anything. While living near Cape Town, South Africa, he manged to make the 3,600 foot ascent of Table Mountain thirty-five times.

Author of Mighty Mary, Adventurous Years, Hudson Taylor--Man of Faith, Desert Track and Jungle Trail, Brave Men to the Battle, J N Andrews--Flame for the Lord, Cabin Boy to Advent Crusader, Only in Africa, The Judsons of Burma, William Booth and His Army, The Restless Missionary, and Ye Shall Reap.