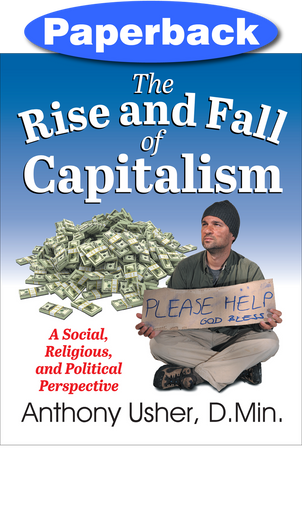 Rise and Fall of Capitalism, The / Usher, Anthony / Paperback / LSI

The love of money and the denial of living wages cast dark shadows on almost every aspect of life of this planet. Washington is full of millionaires who seem to have forgotten their duty to the American people. And corporate executives seek to increase profits any way they can, even if it means cutting the legs out from under their employees. Welcome to America, the home of capitalism in all its glory!

The Rise and Fall of Capitalism: A Social, Religious, and Political Perspective by Anthony Usher examines the history of capitalism and its impact on Americans and discusses solutions to even the playing field between the lower, middle, and upper classes based on biblical principles. In addition to discussing Americans love of money and the economic challenges facing our country, Usher also addresses sensitive religious-political issues that Christians and non-Christians struggle with, such as same-sex marriage, abortion, and the Arab-Israeli conflict. Economics, politics, religion, and current events are linked to the end of the world and the collapse of the best economic system devised by human hands, giving way to a new theocratic kingdom. Are you ready?

Originally from Belize, Anthony Usher has spent thirty-three years as a pastor, administrator, or educator. He currently resides in New York where he is serving as senior pastor of a church in the Bronx.