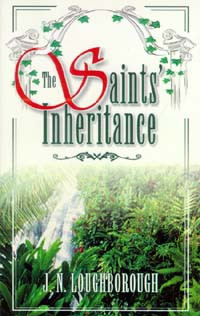 In The Saints' Inheritance, early revivalist J. N. Loughborough studies what awaits the saints after the second coming: their inheritance. Many have supposed that the saints are to receive a literal kingdom with literal territory, but carefully read the biblical evidence that brought Loughborough to the conclusion that it is to be the "kingdom, and dominion, and greatness of the kingdom under the whole heavens," which the saints of God will ultimately inherit as their eternal abode.

Follow the evidence that has led Loughborough to the claim that the saints' final reward is to be this earth redeemed from the curse, after the works of the devil have been burned out of it, and when it stands as beautiful and glorious as when it came from the hands of its Creator who pronounced it "very good."

As Dr. J. Cummings of England said, "We have got a notion as if there were something essentially impure and hopeless in what is material. But it is not so. Only exhaust from the earth the poison, sin - let the footfall of Him who made it be echoed from the hills and valleys once more, at dewy dawn, and at even tide, and this earth of ours will be instantly transformed into an orb, the like of which is not amid all the orbs of the universe besides."

John N. Loughborough was born January 26, 1832. He accepted the truth in September 1852, through the labors of Elder J. N. Andrews, began preaching immediately, and was ordained in 1854. He began work in California in 1868 and in 1878 was sent to Europe. For a time he was president of the Illinois Conference and for six years was superintendent of General Conference districts. He authored the Rise and Progress of Seventh-day Adventists, The Great Second Advent Movement, besides many smaller works. He died in 1924.