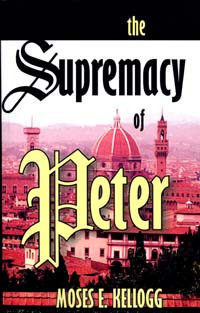 The Vatican today teaches that "The Pope, Bishop of Rome and Peter's successor, is the perpetual and visible source and foundation of the unity both of the bishops and of the whole company of the faithful." "For the Roman Pontiff, by reason of his office as Vicar of Christ, and as pastor of the entire Church has full, supreme, and universal power over the whole Church, a power which he can always exercise unhindered."

Is the papacy correct in this view of "perpetual" succession? In this treatise five points will be established: (1) No primacy was established by Christ or recognized in the apostolic writings; (2) How a primacy grew up in the church; (3) The power and position attained by that primacy in the temporal reign of the popes; (4) The loss of the temporal power; and (5) Church government as revealed in the New Testament.

The book covers the following topics: