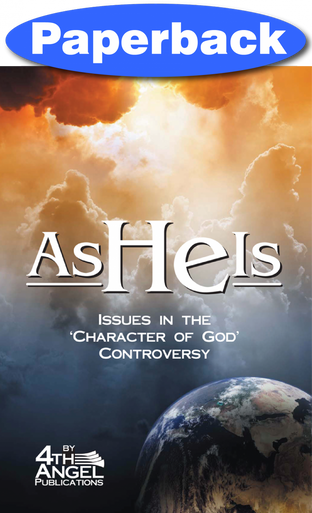 As He Is / 4th Angel Publications / Paperback / LSI

Highly absorbing, fascinating, and even challenging, with prayer this book will change your life.

Through a careful study of Scripture and the Spirit of Prophecy, As He Is examines subjects such as the flood, Sodom and Gomorrah, the plagues of Egypt, Israel’s use of the sword, the final fires of destruction, and much more, thus reconciling the issue of the supposed contradictions found in the character of God as Satan proposes. The rebellion of sin will not be ended until the accusations regarding God’s character and government are brought to a close through God’s people here in earth’s theater.

Many people simultaneously hold two separate pictures of God. They have a “thunder and lightning” view of the Old Testament God of justice, whereas in the New Testament, God is seen as the bearer of mercy, personified in the gentle Lamb, Jesus. But Jesus came to show us the Father; therefore, we are called to cease all double-mindedness about who God is—He must be the same yesterday, today, and forever. God is one in character, and He looks just like Jesus! Justice is not sacrificed in Christ, but it is not served according to the thoughts and ways of humanity. At last it will be seen by all that His justice is mercy.

The book is endorsed by the following individuals:

Kevin Straub is also the author of Of the Times and Seasons - you can find it here.