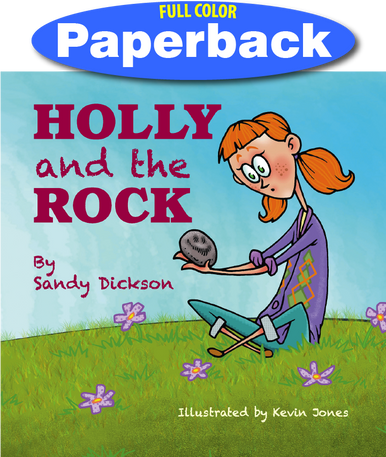 Have you ever wondered what it would be like to have lived in Bible times and seen firsthand the people and events as they were happening? What would it be like if the trees, buildings, or even the rocks could talk and tell of all that they have seen in their lifetimes? Wouldn't it be fun to travel through the land of Israel with someone or something that had been there and could tell you stories of the people that we only read about in the Bible?

Turn your imagination up to “high,” and join Holly as she meets Rock, a stone who has been in Israel since the time of the patriarchs. You've never heard of a talking rock? Well, neither had Holly. But stretch the “let's pretend” part of your brain, and you'll soon be wishing you could ask Rock even more questions than does Holly. You'll meet some very special rocks along the way, but most importantly, you'll meet The Rock.

Sandy Dickson is a world traveler who enjoys writing short stories, song lyrics, and poetry that convey profound messages in a gentle and understandable manner. She has divided her life between living and working in Zion, Illinois, San Fernando Valley, CA and Nashville, TN. She enjoys volunteering at her local cancer treatment center, interacting and praying with patients and being active in her church. She has also spent 16 years as a feature writer for her local newspaper and authored six books, but especially loves writing songs and poetry.

Sandy says, “I love bringing illumination to people about God and His Son, Jesus, and write to broaden awareness that God has a connection to more things than people may realize.”