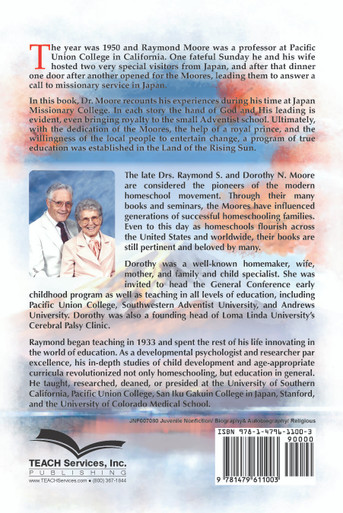 The year was 1950 and Raymond Moore was a professor at Pacific Union College in California. One fateful Sunday he and his wife hosted two very special visitors from Japan, and after that dinner one door after another opened for the Moores, leading them to answer a call to missionary service in Japan.

In this book, Dr. Moore recounts his experiences during his time at Japan Missionary College. In each story the hand of God and His leading is evident, even bringing royalty to the small Adventist school. Ultimately, with the dedication of the Moores, the help of a royal prince, and the willingness of the local people to entertain change, a program of true education was established in the Land of the Rising Sun.

The late Drs. Raymond S. and Dorothy N. Moore are considered the pioneers of the modern homeschool movement. Through their many books and seminars, the Moores have influenced generations of successful homeschooling families. Even to this day as homeschools flourish across the United States and worldwide, their books are still pertinent and beloved by many.

Dorothy was a well-known homemaker, wife, mother, and family and child specialist. She was invited to head the General Conference early childhood program as well as teaching in all levels of education, including Pacific Union College, Southwestern Adventist University, and Andrews University. Dorothy was also a founding head of Loma Linda University’s Cerebral Palsy Clinic.

Raymond began teaching in 1933 and spent the rest of his life innovating in the world of education. As a developmental psychologist and researcher par excellence, his in-depth studies of child development and age-appropriate curricula revolutionized not only homeschooling, but education in general. He taught, researched, deaned, or presided at the University of Southern California, Pacific Union College, San Iku Gakuin College in Japan, Stanford, and the University of Colorado Medical School.