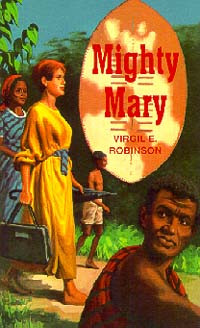 This is the story of a Scottish girl, Mary Slessor, which took place in the late 1800s in West Africa. Mary wanted to be like the famous explorer and missionary, Dr. David Livingstone. Among other hardships, she settled tribal wars by sheer daring, and single-handedly defied tribal customs of killing twin babies and slaughtering women and children. Mary was sometimes misunderstood, sometimes hated and ignored—but in the end, she was "Ma," the loved.

Virgil E Robinson grew up in Africa. Following a family tradition, he later gave twenty-five years to Adventist missions in such places as Malamulo Kamagambo, and Helderberg College. His grandfather had gone to Africa in 1891. Now Robinson's two sons are there. Since 1961 he has worked at the home Study Institute in Washington, D.C.

Hobbies? Robinson says he would rather climb than almost anything. While living near Cape Town, South Africa, he manged to make the 3,600 foot ascent of Table Mountain thirty-five times.

Author of Mighty Mary, Adventurous Years, Hudson Taylor--Man of Faith, Desert Track and Jungle Trail, Brave Men to the Battle, J N Andrews--Flame for the Lord, Cabin Boy to Advent Crusader, Only in Africa, The Judsons of Burma, William Booth and His Army, The Restless Missionary, and Ye Shall Reap.