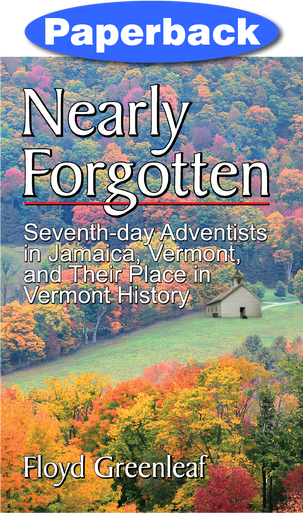 In Nearly Forgotten: Seventh-day Adventists in Jamaica, Vermont, and Their Place in Vermont History, Floyd Greenleaf traces the birth of not only the local Seventh-day Adventist congregation in the rural township of Jamaica but also the rise of the Seventh-day Adventist movement itself, with its roots in Millerism and the development of second-advent and Sabbath theology. Greenleaf explores the complex and dynamic relationship between the trajectory of the church and a multitude of social, economic, political, and religious forces at play during the nineteenth century and into the early twentieth century.

The book gives us an intriguing glimpse at the church's heyday and a mysterious decline that now leaves us with only memorabilia, brief personal accounts, diaries, some church records appearing in denominational publications, and overgrown tombstones. And yet, based on all the clues Greenleaf examines, the vibrant lives appearing in his narrative are important to the story of the Seventh-day Adventist Church. They not only reflected Adventism of the time, but Vermont history as well, and left a mark on the local scene. What life forces remain active, and what elements of identity have persisted to bring us to where we are today?