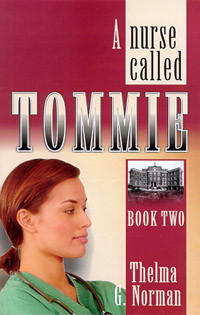 Tommie carried the letter with its familiar handwriting to the seclusion of her room. She hadn't read very far before she realized that the decision, once thought to be far into the future, would have to be made immediately. Jimmy Don was asking her to marry him.

Author Thelma G. Norman brings the beloved Tommie back to life in this sequel, A Nurse Called Tommie. After graduating from the 8th grade, Tommie spends the summer with her Adventist relatives and is introduced to the world of nursing. Enduring ridicule and torment from her friends and family about her religion, Tommie continues to study the Bible, and is eventually baptized. When Tommie graduates from high school, she applies to the nursing program at an Adventist college near her relatives.

Complications arise after she begins to casually date a non-Adventist boy, Jimmy Don. She is more committed than she bargained for when he asks her to marry him. Tommie believes that love can conquer everything until her best friend Lucinda tells her that her new fiancé is a heavy drinker. Heartbroken, Tommie devotes herself to her studies until her roommate Anne hooks her up with a pen pal, Chad Nolan.

Read about Tommie's adventures as a nurse known as "Miss Teddy Bear" to her young patients. Experience miscommunications, late night shifts, and practical jokes with Tommie during many valuable lessons as her graduation draws nearer, and perhaps the love of a man named Chad.