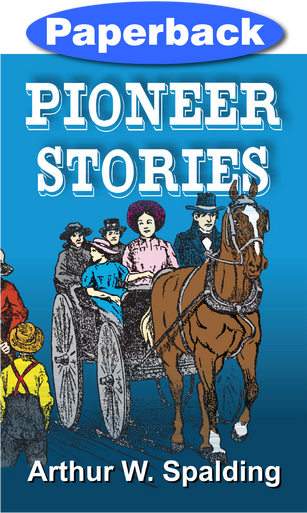 It is good for children to know what their fathers and mothers did; for sometimes that makes a pattern of what the children should do. This is especially true if the children are set to finish the work their parents began. And that is the reason why this book is written: To tell the children of the pioneers in the second advent movement, the beginnings of that movement, and the reasons why they are to carry on.

When this advent message began, the signs of the break-up of the world were few, but in our day they have multiplied a thousand times. The promise of Jesus that He would come again has ever been a beacon of hope to His followers; and the darker the world, the brighter the light. They who love the Lord will eagerly look for every sign that He is coming soon. Those signs are clustering fast; we have not long to wait.

The feet of the pioneers trod a rough and heavy road. They have passed away, and their tasks have become ours. Today it is the privilege not only of grown people but of children also to finish the work, to complete the journey to the City of God. May these stories of the pioneers in this great advent movement inspire many a child and youth to carry on where their fathers led the way, and soon bring the kingdom of Jesus.

Arthur W. Spalding (1877-1953) is best known as a writer of books, of which he produced thirty. Some familiar titles are Captains of the Host and Golden Treasury of Bible Stories. As early as 1919, Spalding had formed a Mission Scouts organization and later became active in junior camp work. He was the founder and secretary of the Home Commission of the General Conference from 1922 to 1942.

Elder Spalding's early years brought many experiences in many places. He was private secretary to Elder R M Kilgore, then superintendent of the southern field, to J H Kellogg and W K Kellogg at Battle Creek, and to E A Sutherland at Battle Creek College. He taught in diverse situations: academy at Graysville, Tennessee, college at Emmanuel Missionary College (now Andrews University), church school in California. He was a co-founder of the Fletcher Institute in North Carolina and principal of the Hurlburt Rural Training School in Georgia. He was editor of the Watchman Magazine from 1907 to 1922. His last years were devoted to special projects for the General Conference and the Review and Herald. His was a long period of service, from the age of fourteen, in 1891, to nearly seventy-seven in 1953.